5:30am alarm clock episodes are no fun, especially when it is your two Singaporean roommates (recent highschool grads) getting up to rustle around more plastic bags then a hoarder would have.

The rustling wouldn’t have been so bad if it only lasted a few minutes, but they proceeded to rustle, organize, and shuffle (presumably this was an attempt at packing) for the next two effin hours!!!

Now, we are still relatively new to travelling, and more specifically hosteling, but it didn’t take long for us to figure out a few rules of etiquette regarding noise creation between certain hours when your roomies are sleeping soundly, and this behaviour was definitely rude and inconsiderate.

Many of you may know this already, but over the past few years I’ve become a veteran hater, but recently I’ve been working hard to overcome the hate in order for me to fully enjoy the variety of experiences that this year have to offer, so I held my peace, and got up to do my own packing around 7:30.

That left us time to nuke a pie (and I ate the other half of the donut I couldn’t finish from the previous day) and hit the road, leaving Queenstown around 8:30am.

Travelling north east towards Christchurch, we passed through the Cromwell and Central Otago area, which is well known for its fruit production, and neither the kg of cherries from a roadside stand nor a fresh bottle of apple boysenberry juice from the Benger fruit juice factory disappointed.

The next portion of the drive took us along the road beside lake Pukaki and Lake Tekapo, where we were blessed with only partially cloudy skies and stunning views of the immense and astounding Aoraki/Mt. Cook, which had eluded us thus far due to weather on the west coast.

We didn’t stop for any hikes or other tourist activities on the drive, as we’d designated this as a ‘travel day’, so we ended up arriving in Christchurch at around 4:30pm.

We didn’t have high hopes or great expectations for the third largest city in NZ, mostly because of what we’d read online and heard about the aftermath of the 2010 earthquake, aftershock, and 2011 earthquake but had booked ourselves into a reasonably priced/well rated hostel close to the city centre and planned to see the city anyway.

Unfortunately, the hostel turned out to be pretty ghetto, and even though it was relatively close to the cbd (central business district), there was no way of actually enjoying the cbd due to the fact that it appeared as though it was a post apocalyptic warzone.

Holy eff were we ever shocked at the condition of the city, and even a browse through an incredible scotch shop (where I wanted to blow my entire years budget on one bottle)

couldn’t cheer me up (I was also a bit concerned that so many top-shelf bottles were in fact on the top shelf, due to the fact that the city is on an active faultline…).

We walked around some more, expecting at least some reasonable recovery from the disasters, but there was a ‘red zone’ still in effect (which was a closely guarded perimeter around the areas that suffered the most damage), and even the accessible areas outside the red zone were made up mostly of decimated and decrepit buildings and half-demolished structures. 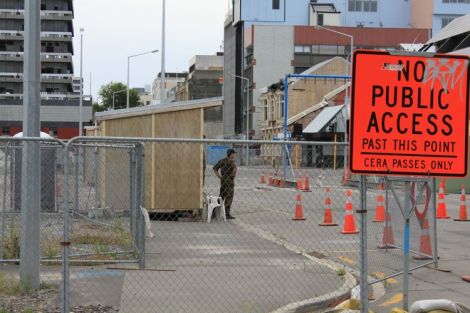 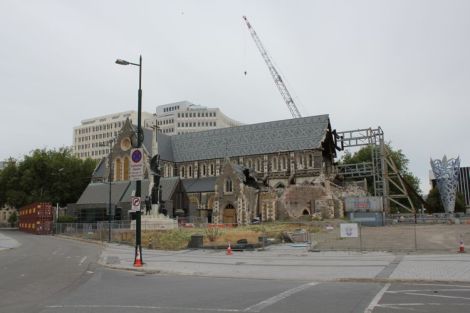 It turned out to be a very depressing experience. and was an eye opener for us to see what can happen even in a ‘first-world’ city (not to say that we are ignorant enough to think that a ‘first world’ city/country would ever be immune to or protected from the natural disasters that seem to be somewhat commonplace in the more populous and impoverished corners [majority?] of our planet) and how easy it is for good ol’ Ma Nature to rend our manmade concrete jungles into heaps of rubble at the bat of her eyelash.

It made us consider how we would feel should a similar disaster ever strike our own home of Toronto, wonder how our government would deal with it (not well I suspect), and how hard it would be for us (and others) to collect our insurance and start rebuilding.

We met a couple of Canadian tourists from Regina Saskatchewan while walking through a particularly devastated area, and talked about the state of the city.

They mentioned that they’d read/heard about the insurance companies being a major hindrance in the redevelopment, which reinforced my belief that in situations like this, where many people’s livelihood and homes have been destroyed by a supposedly covered incident, insurance companies can be likened to scum of the earth if/when they decide they don’t want to pay out.

In a bit of a daze, and still in shock with the state of affairs, we grabbed a snack at the only open and well-patronized spots we could find (a nice new local pub/pizza bar with local beer and wood fired pizza oven), but were still confronted with a very depressing view from our window seat and Julie even had to switch spots to the other side of the table in order to avoid the scenery for a bit.

Words really cannot express how miserable the whole situation was, and we were somewhat puzzled how the local population managed to get through their day(s) without breaking down in tears, but I guess that just goes to show how good humans are at dealing with adversity (maybe?).

We walked back to our hostel and, sick of walking around the battleground, grabbed the car and went in search of real dinner.

We noticed a Thai resto that looked ok at first sight, but upon further inspection turned out to be pretty ghetto and expensive, so we ended up at a decent and new-looking Korean place where I attempted to order in my broken beginner Korean and forced Julie to try dwenjang chigae for the first time, while I sated my hunger on their delicious yuk gae jang.

After this lone bright spot, we went back to hostel again, and after my first shave in 2 weeks (so I wouldn’t get ‘randomly’ chosen for a search at airport security), we went to bed.

The next day, we woke up to a dismal and incessant rainstorm, which was unfortunately very fitting in that it matched the depressing feeling of the city, so not wanting to expose ourselves to more depressing and very possibly soon-to-be-zombie territory, we returned our hired car (one way rentals ftw! Thanks Apex!!! I hope you manage to ‘keep it real’ even though you’re being/have been[?] bought out by Avis Budget Group) and spent the rest of the afternoon at the airport drying our clothes on the backs of lounge chairs (in contravention of posted airport rules which we didn’t see until after the fact), computing, reading, and watching LOTR on Julie’s laptop (with me perhaps finishing off the two beers I had in my luggage leftover from our journey, by stealthily pouring them into my water bottle…).

We’d already decided before our trip to spend the night at airport waiting for 6am flight to Sydney, mostly because we couldn’t figure out an efficient or cost effective way of returning our car, finding a place to stay close by, or getting a shuttle to the airport at 3am, and this turned out to be as expected: very uncomfortable and blah… but there were actually a ton of people doing it too (although some of them were just ‘travellers’ [read;homeless] who weren’t actually flying but just crashing in a warm spot with wifi for the night) but at least we saved ourselves probably 100$, and they did have free wifi. 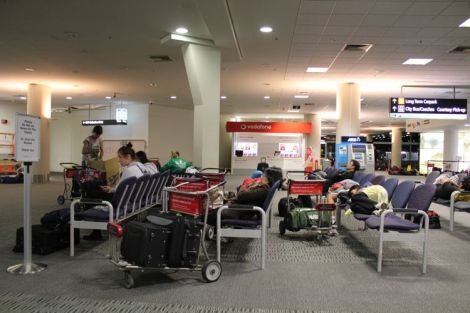 We also had time to organize our bags, and try out another little money-saving trick by combining our two bags into one so that we only had to pay for one checked bag (none of the airlines we are travelling on allow ‘free’ or ‘included’ checked luggage), because they probably would not have let them on as carry on as we’d originally intended (too much proven-awesome icebreaker gear got packed in there I guess:p).

I hate to say this, but as a traveller, the moral of the story here is if you want to see typical NZ awesomeness, don’t waste your time in Christchurch!!! We didn’t believe people when they told us that, but seriously, don’t waste your time!!! There is enough awesome in the rest of the country to keep you occupied for a year.

Even though our visit to Christchurch was a very anticlimactic and quite depressing end to an absolutely wonderful NZ experience, even the horror of our final destination couldn’t overshadow the joy and wonder we’d felt consistently for the previous 2 weeks touring such a spectacular country full of wonderful friendly people.

Toli Alice HannaMarch 23rd, 2018
In case you're wondering why we (still) haven't been travelling or active on the blog recently...