What to do with an 11 hour stopover in LAX… Hmmmmmmm

Well, when you leave Toronto and it is -5 C, and you arrive in California and it’s a balmy 15 C without a cloud in the sky and even warmer in the sun, the answer is go to the beach!

I’ve never had a chance to visit the west coast of the good ol’ US of A, so when given an opportunity to start our trip off with a dip in the pacific ocean, of course we leapt at it.

We didn’t check any baggage from Toronto, so we had all our bags with us, and while looking at the terminal map to try to figure out a way to get to a metro bus, we were approached by a girl who was on our flight with us and was looking to do something adventurous as well during the 11 hours we had before heading to Nadi. 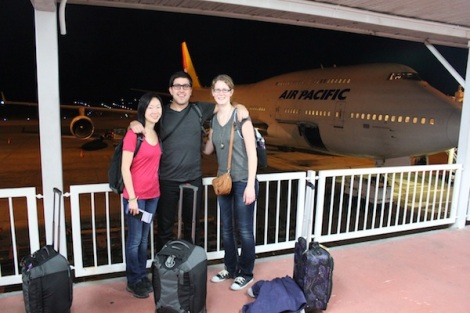 Juliana is heading to NZ to do a University Music Exchange Semester, so we hit it off immediately and the three of us proceeded to find a way to get to somewhere interesting. 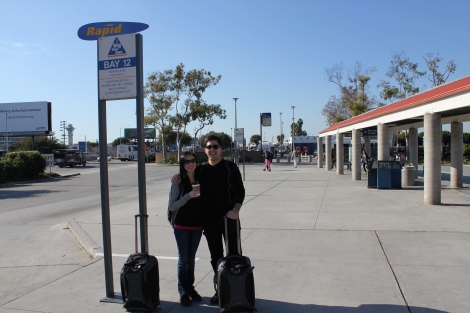 The three of us decided to jump on the #3 bus to Santa Monica, and after spending 1USD each and spending 45 mins on the bus, we jumped off into one of the biggest tourist traps I’ve ever seen.

However, that is not without merit.

Santa Monica Beach is one of the nicest beaches I’ve ever seen, rimmed by the sparkling pacific on the West, and the beautiful peaks of the San Gabriel Mountains to the North East.

We ate lunch there and waded into the Pacific (very briefly because holy jeebus was it ever cold!) before easily finding our way back to the airport via the #3 bus again (1USD, 45 minutes).

We could have easily spent many more hours there exploring the coastline on the easily accessible boardwalk, or the multitude of tacky shopping areas, or the more modern mall that dominates a large stretch of the Santa Monica City core, but we opted to err on the side of caution and make it back to the airport with time to spare before out flight.

So, here we are, waiting to board.

One response to “Santa Monica Beach”

Toli Alice HannaMarch 23rd, 2018
In case you're wondering why we (still) haven't been travelling or active on the blog recently...