While originally scheduled to depart Wellington to Picton on the 2:30pm Interislander ferry, we were able to get our ticket changed to the 8:25am departure so that we could take more time driving around the Blenheim (pron: blen-um)/Marlborough wine region (guess whose idea that was;).

We were upgraded to a private room in our hostel the previous 2 nights in Wellington (110% win) so slept very well and had no trouble waking up in order to quickly nuke 2 pies (mince and cheese, the last 2 that remained of a 6 pack we’d purchased the previous day) and ensure that we made it to the ferry dock to check in our vehicle by the 7:25am cutoff.

The interislander folks sure know their bit, and the launch went very smoothly.

We spent the next 3 hours exploring the ship and lounging in various sunny areas (hullo first NZ sunburn!!!) or snapping off more pics than necessary (just like everyone else): 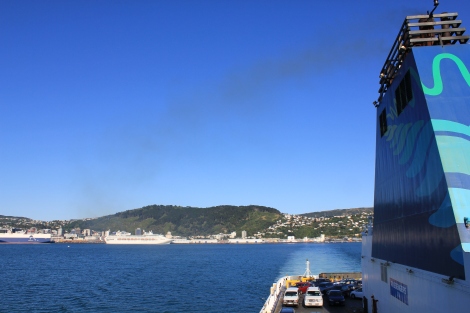 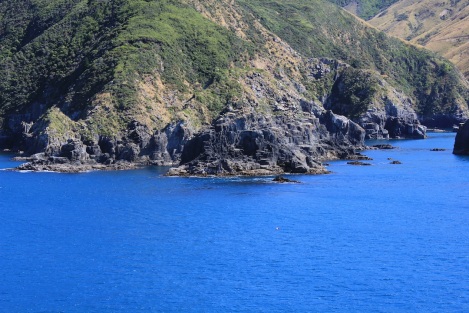 … before disembarking in Picton around noon.

After mucking about in Picton (getting gas, getting lost, taking silly pictures, etc…)

we decided to take the scenic route west 30klicks to Havelock which could only take an hour right?

By the time we got around the circuitous route we’d chosen and ended up back in wine country it was nigh on 4pm!

I can’t even remember where the time went!

Oh well… It was a beautiful drive and I’m glad we did it. 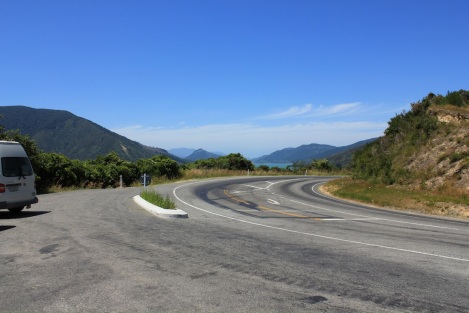 Just before we got back on the main highway Julie noticed a winery that a looked pretty decent so we turned in to have a look and I had a 7$/7wine (very generous pours) tasting flight (they call flights ‘platters’ in NZ)  that took the edge off quite nicely. 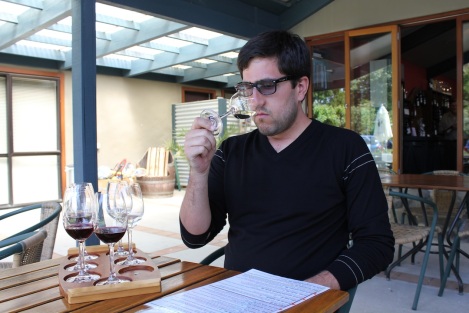 Unfortunately (fortunately?;) it also teased my thirst-buds (those exist right?) and almost made me wish we’d come earlier, because like every other establishment we’d noticed so far in NZ, the wineries all closed around 4:30-5pm.

We did some quick research (I’m still not sure why Julie was so gung-ho to get me wined up, because she would have to drive the rest of the way to Kaikoura… But maybe it’s cuz she likes me and wants me to be happy or something… I’m very grateful either way :):):), found two more wineries that we might be able to catch before they closed, and did just that.

I usually feel douchey walking into a place if I know it’s closing in 5 minutes, but not this time;) because we made it to Hunter’s winery at 4:28pm just in time to catch them putting away their stemware and I still managed go get a tasting in (complimentary!!! small pours, but free ftw!), and even purchased a bottle of a sauv-blanc I liked.

We also made it to Cloudy Bay winery at 4:57pm (closed at 5) and I made sure to tick off the server who very obviously wanted to finish work and go home rather than listen to me pretend I know anything at all about wine (*sniffs* hmmmm… a hint of oak and a bouquet of leather perhaps?… “Sir, that is an un-oaked chardonnay”…. You get the idea) while tasting their offerings (2 winemaker selections = complimentary taste, or 5$ for 6 wines of choice, both very stingy pours) and making off with a tasting glass with which to later enjoy my bottle of Hunter sauv-blanc.

Sufficiently tipsy, I was then chauffeured the rest of the way to Kaikoura by Ms. Lee.

One last item of extreme importance was our first encounter with seals at a small roadside stop just north of Kaikoura called Ohau Point.

A large colony of fur seals live right by the side of the highway (which itself abuts the pacific only meters away) and we spent a good 20 minutes gawking over the awesomeness of this opportunity.

Our arrival at the hostel was less than stellar, as was our roommate (we’d booked a 3 bed room in hopes that we’d have it to ourselves) who had taken my pillow and advised me that I could just go ahead and get another one from the front desk (which had closed an hour ago) and then proceeded to tell us he didn’t understand why nobody likes Americans (he was a friendly ol’ Texan himself).